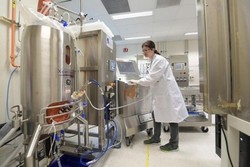 Overfishing is destroying the world’s oceans. These start-ups think growing fish in a lab can help

Lab-grown fish may hit your dinner plate sooner than you think.

“At first it was really hard to generate investor interest in this type of company,” Finless Foods CEO Mike Selden told CNBC in an interview. ”(But) there’s been a wild rush of companies in the last few months.”

A couple years ago, there were no companies focused on lab-grown seafood. Now a handful have cropped up, including Finless Foods, Blue Nalu, Wild Type and Seafuture. Their founders hope fish grown in a lab can help them break into the more than $120 billion seafood market, and make it more sustainable in the process.

“There’s been a good five-plus years of science and publications around the meat category that give people much more of a starting point than on the seafood side. So seafood is much more challenging because there isn’t the history,” said Lou Cooperhouse, CEO of Blue Nalu, which raised $4.5 million in August.

Cultured seafood has a chance of hitting the market first, since the texture of fish is less complex to replicate than land-based meat. That factor has made cultured seafood appealing to investors.

“I think the seafood approach will come to fruition first,” Draper Associates Founder Tim Draper told CNBC in an e-mail. “Fish are less complex than chickens or cows. I suspect their meat will be easier to manufacture.”

Growing seafood in an artificial medium also means not being limited to recreating what already exists. Scientists might be able to create new fish tissue combinations and new flavor profiles, like combining tuna and salmon meat.

“This is an opportunity to imagine new things,” Wild Type Co-Founder Justin Kolbeck said. “Or even get really crazy and really out there into science fiction a little bit. What about coming up with the kind of things you see in some futuristic movies for example?”