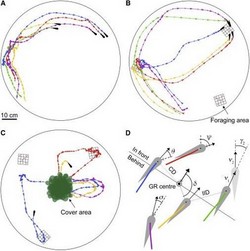 Germany.- New research sheds light on how “animal personalities” – inter-individual differences in animal behaviour – can drive the collective behaviour and functioning of animal groups such as schools of fish, including their cohesion, leadership, movement dynamics, and group performance. These research findings from the University of Konstanz, the Max Planck Institute of Ornithology and the University of Cambridge provide important new insights that could help explain and predict the emergence of complex collective behavioural patterns across social and ecological scales, with implications for conservation and fisheries and potentially creating bio-inspired robot swarms. It may even help us understand human society and team performance.

For centuries, scientists and non-scientists alike have been fascinated by the beautiful and often complex collective behaviour of animal groups, such as flocks of birds, schools of fish, and herds of wildebeest. Animals often group together and time and coordinate their behaviour as it may provide them with protection against predators and help in finding food. Often, those spectacular collective patterns emerge from individual group members using simple rules in their interactions, as compelling experimental and theoretical work has shown.

Over the last decade it has become apparent that consistent inter-individual differences are ubiquitous across the animal kingdom. Animals often differ consistently from one another in a wide range of different traits, often referred to as “animal personalities”. But the role such differences may play in the emergence of collective behaviour remains unclear.

In a new paper in the journal Current Biology, a team of researchers from the University of Konstanz, the Max Planck Institute of Ornithology and the University of Cambridge now present compelling experimental and theoretical evidence that suggests that individual characteristics play a fundamental role in the dynamics and functioning of social groups. This research shows for the first time how the behaviour of groups can be predicted from the characteristics of the individuals that make them up and takes an impressive step forward in predicting how individuals in groups will behave based on their personality.

Dr Jolle Jolles, lead author of the study, said: “To properly understand how much influence individuals have over the collective behaviour of the group, we tested individual stickleback fish in different behavioural assays and then exposed them in groups to a range of ecological environments while accurately tracking their position and movements over time.”

“What we found is that fish that tended to spent more time near others actually had lower individual speeds, had more central positions in the group, and were much more likely to follow in the freely swimming shoals. In turn, groups composed of such individuals were more cohesive, moved less, and were considerately less coordinated than groups consisting of individuals that had less social, faster behavioural tendencies.”

Dr Andrea Manica, reader at the Department of Zoology University of Cambridge and co-author added: “By also testing the shoals in different environments with hidden patches of food, we found that it was the combination of the fishes’ exploratory tendency and their speed in the group that ultimately drove both individual and group foraging performance.”

“We additionally created a simple agent-based computer model of self-organised groups. This allowed us to reveal that these multi-scale effects emerge naturally from the local interactions of individuals that simply differ in their preferred swimming speeds" said Prof. Iain Couzin, director of the Max Plank Institute of Ornithology, Department of Collective Behavior, and co-author of the study. This suggests that individual differences in speed can provide a simple, self-organizing mechanism by which collective behavior and group functioning can emerge without individuals requiring global knowledge of their group.

“By harmonising two rather different approaches from the fields of animal personality and collective behaviour this study achieves a parsimonious, self-consistent explanation of how inter-individual differences can drive within- and between-group variability and the emergence of group structure, leadership, movement dynamics, and group foraging performance” said Jolles.