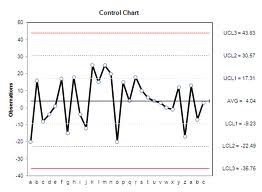 What is a Control Chart?

presents a graphic display of process stability or instability over time (Viewgraph 1).

Every process has variation. Some variation may be the result of causes which are

not normally present in the process. This could be special cause variation. Some

variation is simply the result of numerous, ever-present differences in the process.

This is common cause variation. Control Charts differentiate between these two

One goal of using a Control Chart is to achieve and maintain process stability.

degree of consistency in the past and is expected to continue to do so in the future.

based on plus or minus 3 standard deviations (3 sigma) of the centerline [Ref.

6, p. 82]. We will discuss methods for calculating 3 sigma limits later in this module.

NOTE: Control limits represent the limits of variation that should be expected from

way. Control limits should not be confused with specification limits, which

Why should teams use Control Charts?

spread of the data. Control Charts help you monitor the behavior of your process to

determine whether it is stable. Like Run Charts, they display data in the time

sequence in which they occurred. However, Control Charts are more efficient

that Run Charts in assessing and achieving process stability.