Tourism is the cultural and archaeological sites of the most important and oldest types of tourism in Egypt as Egypt has many of the ancient Egyptian, Greek, Romanian and museums, has created cultural tourism since the discovery of ancient Egyptian antiquities and decode hieroglyphs, and even now is not interrupted missions effects, travelers, tourists and authors of books tourism to Egypt has been published hundreds of books in different languages and was a way to attract tourists from all over the world to see Egypt and its effects and ancient civilizations through the national museums and art and antiques.

The most important areas of archaeological tourism in Cairo and Giza:

And is located in the Valley Mararey South Helwan. 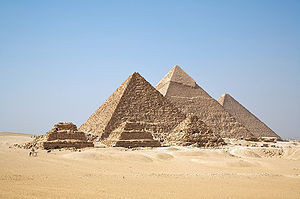 : The three pyramids of Khufu, Khafre and Menkaure, one of the seven wonders of the world as it is considered a unique architectural achievement in engineering Hmok attest to the greatness of Egypt and stands to guard the Great Sphinx, a colossal statue consists of a body of a lion and a human face.

Held the first stone structure in the world is on the Saqqara pyramid built by King Zoser in 2816 BC.

The most important areas of archaeological tourism in Alexandria:

Pompey's pillar, the last remaining relics of the temple Alserabayoum Bustumus established due date of this column to the third century AD.

The bench is located in Kom, a Roman Theater reef in Egypt.

* Temple of the head black:

Built and due to the late second and early third century AD and includes the lobby of the temple statues of Isis and Osiris and Farbokratis.

Is the largest Romanian public cemeteries, which were found in Alexandria is located on the border of West Alexandria cowardly old and due to the second century AD.

Built by Cleopatra VII on behalf of Marc Antony has been erected in front of the entrance obelisks were moved from the Temple of Ain Shams, and bearing the names of the kings of the Pharaohs Tuthmosis III, Seti I and Ramses II was quoted by one Almslten in 1877 to London and the second to New York.

The most important archeological sites in Luxor tourist:

Of the most important cities in the southern third level, which includes the effects of the world and was known in the old state in 270-280 BC. M and known in the Middle when I put the foundations of the Temple of Karnak, and was the capital of the modern state and is known by several names (and AST) Luxor and Thebes, Luxor is a civilian as a museum open to the effects of ancient Egyptian and the most important features:

A wonderful complex of beautiful temples which has never existed, where comprises the goddess temples of Amun at Karnak, and his wife the goddess Mut and son Khonsu, god of the moon god.

Was founded after the restoration project complete and considers the lobby of Amenhotep III, the most beautiful courtyard exists between the Egyptian temples, where surrounded lobby 64 columns and hall of columns by 32 columns and has been called the yard the sun because it was open to the sky and the courtyard was surrounded by corridors roofed afford these columns.

The opening of a substantial addition on the tourist map because of its huge in terms of technical and aesthetic, as it is the largest building of the Egyptian king has remained intact so far and called Karnak, the western view of the magnitude which is a large temples remaining mainland western Luxor, which includes temples of great historical importance and archaeological sites which of the largest funerary temples dedicated to honor the memory of the pharaohs in the modern state, was established by King Ramses III on the beach right from the south of Thebes.

Valley of the Kings:

And includes a huge number of tombs, including Tutankhamun's tomb, which moved its contents to the Egyptian Museum in Cairo is the most important archaeological tombs tomb of Ramses I, Ramses III and Horemheb and Tuthmosis III.

Valley of the Queens:

And includes a large number of graves of queens of the most important tomb of Nefertari and Queen Tiye.

To include the city workers who had built the tombs of the Valley of the Kings and is packed with tombs.

Is the first of its kind in the world, comprising 150 pieces between mummies and coffins and embalming tools.

The most important archeological sites in Aswan tourist:

The city of Aswan, the world's most beautiful winter resorts and includes several historic monuments, namely: the temples of Abu Simbel and the two temples built by Ramses II most famous pharaohs of Egypt between 1223 BC and 1290 AD. The two most important temples of Nubia The two temples of architectural wonders have been fully carved inside the mountain, namely:

Has been devoted to the worship of the god Ra the sun god Hor Acht bright.

Built by Ramses II to commemorate his beloved wife Nefertari and the advantage of this temple is the beauty of his drawings, colors, and is called the Temple of the goddess of love and rock music and beauty.

And includes the remains of temples, which is an unparalleled masterpiece.

The most important areas of archaeological tourism in Upper Egypt:

Gains its importance from the presence of the royal tombs Among the most famous landmarks Temple Temple of Seti I and Ramses II.

Established in the era of the Ptolemies and consists of a forest of columns is similar to the columns, which tops the entrance to the temple and the temple hall decorated with drawings, which are still vivid colors.

The first planned cities in the history is a civil Akhetaten was built by Pharaoh Akhenaten, Egypt's great.

And includes a pyramid built by King Meidum Bent Pyramid is Meidum first pyramids in history.

Tuna area of the mountain:

Draws attention Brsomea Fine Art, a mixture of Greek and ancient Egyptian mummy and has a girl named Isadora.

* The most important areas of archaeological tourism in Sinai:

It is the oldest and documentation of cultural tourism in the Sinai is located in a valley east of the Gulf of Suez.

Patterns and the effects of Srabit server:

It is full of inscriptions and monuments and temples dating back to the kings of the Twelfth Dynasty.

The mountains were involved in the value of holiness and the establishment of offerings.

* The most important archeological sites in Fayoum Tourism:

Includes a number of effects including: the pyramid of Agon, the pyramid of Hawara, base of the pyramid Amnhamat, Obelisk of Senusret, civil Mady, mostly due to the family of 12 by the ruins of cities and palaces including the city of Karanis archaeological com hill, Dimip lions Palace Karun, civil or Alpremat, the palace chapel.

* The most important areas of archaeological tourist oases:

It dates back to the family 26 min m and was built to worship the holy trinity of Amon Ra, death, Khonsu.

263 and includes a structure in the form of domes.

Built for the worship of the Holy Trinity due to the family 27 BC AD.

Built in the Roman era.

One of the old forts built in the Roman era.

And there are cemeteries dating back to the Sixth Dynasty BC.

Village built on the Pharaonic style and there are several tombs of the most important cemetery Keinanos.
Interment Almdhuqp:

This is attributed to the Roman era, the most important cemetery Ba - De Basant - Auxerre.

And due to the Turkish era, a highly populated now.

And returns to the family of the sixth BC.

Due to the Roman era and was built for the worship of the god Amun and his wife's death.

This is attributed to the Ayyubid period.

Includes about 268 kind sulfur and metal in addition to the pharaonic and Romanian.

The temple includes a shower, which was built for the worship of the god Serapis in the Roman era.

And there are short-Farafra and Qasr Abu Minqara a return to the Roman era.

There are several museums located in Egypt, ranging from museums and national and regional art and contains masterpieces of cultural and civilization, including:

With a unique archaeological Pharaonic impressive and contains a quarter million artifacts, tells the history of ancient Egypt.

Lander and includes the greatest collection of antiques and relics and treasures that have been creativity in the Islamic civilization, with about eighty thousand masterpiece of porcelain, pottery, glass, rock crystal, carpets, textiles, metals, jewelry, wood, ivory and precious stones.

Includes the Throne Room and some old pieces of furniture from the era of Muhammad Ali as well as many Islamic monuments.

Built on Arab-style Central Park area of 30 acres containing a rare trees and contains a museum on ancient Islamic manuscripts and textiles embroidered in addition to the rare collections of carpets, crystal vases and candlesticks.

Includes a large number of artifacts of historical value art dating to the era before the birth, there is in Alexandria.

Is a collection of antiquities found in the Aswan and Nubia, including the mummy of the sacred ram god Khnum.

The museum houses works from Inspired by the ancient Egyptian civilization, and the most important artifacts left behind by the rise of Mahmoud Mokhtar Egypt statue carved from granite, primarily in the face of the University of Cairo.

Includes a large number of works of sculpture, photography, architecture.

Includes production of the influential French Masterpieces of the school is the most important museum collections of images, photography, bronze sculptures and a wide range of metal objects, glassware and a range of Japanese antiques Lucky.

Of the most important cultural institutions that preserve its heritage and the Coptic Museum houses 14 thousand archaeological pieces enrich the heritage of Coptic art in the world.

Includes a large number of his works in painting, which earned him an international reputation in the field of Fine Art.

Is one of the largest museums in the world where agriculture is in ancient times and allows the visitor to identify the evolution of life in the Egyptian countryside.

Inside the Citadel of Saladin in Cairo, which contains models of weapons and clothing soldiers Egypt and pictures of the great battles fought by the people since the days of the Mamluks of Egypt until the war the sixth of October 1973.

Established within the Bey Citadel historic Alexandria and includes in its contents summary heritage submitted by Egypt to humanity through its shipping of civilized values and additions valuable in the fields of knowledge, arts and economic activity and trade as well as all glory marine obtained by Egypt on the ages and formed the heritage of a national home all the time.

Includes all types of weapons used by the Germans and the British in World War II and has three-dimensional models and images of battles and commanders of the operations of all countries of the Axis and the Allies.

Source: Archaeological Institute and the location of the Ministry for Tourism