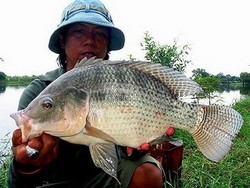 It matters who your mother is, even for fish

Tilapia has become a top seafood staple on many dinner tables worldwide. New research shows the Tilapia-industry can produce more of the finest cuts by paying closer attention to maternal breeding factors. In breeding and genetics, the environment provided by the mother, that is the maternal factors like egg size and quality, affect the growth and the size of the offspring produced.

A new study has found that including information about the mother (maternal effect) changed the decision about selection of the best breeding candidates in Tilapia, a popular tropical aquaculture fish. In addition, it showed the possibility to better breed Tilapia by selecting fathers and mothers in separate lines, and that we maybe should develop crossbreeding systems for fish for the first time.

The study was conducted by researchers at Norwegian University of Life Sciences (NMBU), in collaboration with the world leading tilapia genetics company, Genomar AS, Norway.

We all know that genes are passed from parents to offspring; half from the father and half from the mother. Breeding of Tilapia deals with the selection of individuals with the best genes, and to have the best predicted breeding values.

“Comparing Tilapia to dogs, the growth rate of new-born puppies depends on the milk production of the mother and the number of puppies born. Similarly, our aim was to try to separate the effect of genes on the growth of the puppies from those of the environment (e.g. maternal effect in Tilapia),” said Rajesh Joshi, PhD candidate at the Department of Animal and Aquacultural Sciences at NMBU and one of the authors of the study.

Further, when the offspring inherits the gene from its mother and father, if their combined effect is equal to the sum of their individual effects, it is called additive genetic effects, he explained.

“When we go to a fashion website to buy some clothes, the decision on which clothes to buy depends on the filters we choose: like size, price, brand, quality, colour, etc. Selecting or dis-selecting one of these decision parameters bring changes in the top recommendation lists.

Further, the research found that adding non-additive effects into the decision making did not change the top ranked list very much.

“This shows that the influence of mother (probably due to the size and quality of the eggs) is significant for the growth and weight of Tilapia. This also give us an opportunity to breed better Tilapia by recognizing which fish makes better mothers than others, and maybe also utilize other genetic interaction effects,” Joshi concluded.