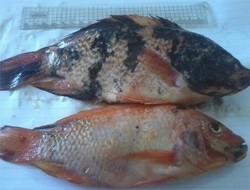 A breeding program for genetic improvement of red tilapia in Egypt was established in 2014 at the Fish Research Center (FRC), Suez Canal University, Ismailia, Egypt. The first generation of marked (fin-clipped) fish of the Egypt red strain were transferred from the nursery pond to the grow-out pond, wot a mean weight of approximately 180 grams. Animal selection for growth rate and body thickness in 4 months was performed at the time of transfer. At that time, we obtained a definite indication of the selection intensity and broodstock replacement rates achieved with the current marking system. The fish in the nursery pond became the first generation, G1, of selected broodstock.

Age and size at selection

The question is whether or not to select large animals early, e.g. when they are moved out of the nursery ponds. On the positive side for early selection: It will shorten the generation interval and speed up the rate of genetic gain by 50 percent or more. Against this, early selection may distort growth curves, resulting in rapid maturation and fish that grow slowly after maturation. There is considerable anecdotal and some experimental evidence that this happens in tilapia, where the phenomenon is called “hitting the wall.” We planned research to elucidate this issue by looking at the correlation between early and late grow rates.

Selection intensity will limit the rate of genetic gain

The main factor that limits the rate of genetic progress is the number of fish that can be marked by fin-clipping, which was between 4,000 and 6,000. The estimated number of selected new breeders required to replace other breeders annually was about 300 for each of the two lines. Mortality between tagging and selection reduced the number available for selection, with the result that the selection intensity was anticipated to be approximately 10 percent. This is actually rather good in relation to what can be achieved in many terrestrial animals raised for food and that have only a few offspring. However, it was significantly less than what could be achieved in tilapia if a different marking technique could be used.

The relationship between selection intensity and the expected rate of genetic gain is non-linear. It can be calculated that, other genetic factors being equal, increasing the rate of genetic gain by 50 percent would require decreasing the fraction of animals selected in each generation from 10 percent down to approximately 0.42 percent. This would mean marking 95,000 animals instead of 4,000, which is clearly not possible with fin clips. However, it would be easy if the fish had natural color marks such as the dominant red gene of the Egypt red strain. Increasing the selection intensity enough to double the currently projected rate of genetic gain would mean marking about 700,000 fish instead of 4,000.

Rate of broodstock replacement will limit the rate of genetic gain

The plan was to maintain a stock of 300 selected female breeders in each of the M and F lines. These were called “grandparent” breeders and were labeled M and F in the flow diagram (Fig. 2). With 300 breeders selected out of 4,000 to 6,000 marked, it may be possible to maintain a selection intensity of 10 percent while replacing all the breeders every year to minimize the generation time. However, 300 breeders do not produce enough fry to replace the breeders of the parental generation, which were used to generate the F1 hybrid offspring for the production line. It appeared that 30,000 breeders were needed annually, and 300 breeders produced only about 12,000 fry/month, which was not enough when mortality was considered. It was suggested that the parental breeders could be replaced every second year instead of every year, but this represented a delay in the transfer of the benefits of genetic improvement to the production line.

Fin clipping were used to distinguish between strains; this fin-clipping procedure was demonstrated at the WorldFish Center (Abbassa Research Station) between 2004 and 2007 by the author. The rate of loss of marks by regeneration is quite low and the marked fish were easy to spot on the sorting tables. The maximum number of fish that were marked in one episode, i.e. one round of selection, were estimated to be 4,000 to 6,000. This establishes an upper limit to the selection intensity that can be achieved with this marking procedure to approximately 10 percent.

Regarding natural color marks (red vs. silver wild-type), much higher selection intensities could be achieved if the presence or absence of the dominant red gene can be used, instead of left/right fin clipping, to distinguish M and F strains. There was essentially no upper limit to the selection intensity except the number of fish that can be measured, which was high when they were pre-screened to concentrate the larger ones before measurement. The F1 hybrids between the homozygous red and homozygous silver strains were themselves red, as required for production. These F1 red fish mated among themselves produced 25 percent silver fish in each generation.

P.I.T. tag markers and DNA samples were used. When each new generation of selected “grandparent” broodstock was produced, the animals that were chosen to become breeders were P.I.T. – tagged so they were identified and removed from the breeder pool at the appropriate time. Tissue samples were taken from the fins at the same time as the fish were tagged and carefully stored for later DNA analysis. The DNA data were eventually used for several purposes: monitoring the rate of inbreeding and loss of genetic diversity, documentation of the broodstock for forensic and legal protection of the owner’s proprietary strain.

The role of genetics in the farm corporate development

The annual rate of tilapia production at this breeding program was scheduled to increase from around 3,000 mt to approximately 17,000 mt over the next five years. The production environment was changed from intensive pond culture to super-intensive culture in 250-m2 flow-through tanks, each holding around 30,000 fish. Production in the new system were initiated with the best available strain, which provided the farm owners an initial cost-of-production advantage over its competitors. If the best strain turns out to be widely-available like the selected red strain, it is inevitable that farm’s competitors will sooner or later also recognize the superiority of the same strain. I estimated that the competitive window of opportunity for the farm running this program, based on capturing profits from the superior cost: price ratio of the best strain now available, may be approximately five years.

Throughout this five-year window of opportunity, the genetics program will be improving the growth rate of the strain at a predicted rate of 5-7 percent per generation. Thus, when the currently best strain eventually becomes a widely used commodity, the farm will continue to have a significant cost: price advantage over its competitors because its version of the strain will have improved. At that point the FRC alone will have the best strain (although other aquaculture companies may have comparable genetics programs) and may choose to begin selling fry and fingerlings to other producers. When FRC begins to sell fry and fingerlings (“genetic products”) to other producers it will be able to multiply its capture of the superior cost: price ratio by charging a relatively high price for the fry. This is similar to the way modern seed producers in other industries capture some of the profits from the improved productivity of their seeds. The key to selling genetic products to farmers at a high price (as exemplified by the sale of semen in the dairy cattle industry), is the ability to demonstrate unequivocally and precisely what the increase in productivity will be.

When the FRC begins to sell fry and fingerlings (“genetic products”) to other producers, it will be able to multiply its capture of the superior cost: price ratio by charging a relatively high price for the fry. Demonstrating what the increase in productivity will be is key for selling genetically-improved products. Thus, accurate documentation and standardization of selection and testing procedures were given a high priority at FRC. The ISO standards for documentation and repeatability will be required when FRC begins to sell genetic products (e.g. fry or fingerlings) on the basis of a proven and repeatable improvement in performance.

Security issues and protection of the FRC strains

Regarding physical protection of the strains, the inbred lines were protected against unauthorized reproduction by distributing only the F1 hybrids between two or more lines. Furthermore, the hybrids were hormonally sex-reversed. If the hybrids are reproduced by a “hijacker,” the resulting F2 generation will be less uniform and generally inferior to their parents, both in form and in growth rate. However, FRC developed strategy to maintain very high biosecurity over its pure M and F grandparent lines.

In considering legal protection and registration, the procedure for officially registering or patenting a new genetic variety requires a demonstration of the uniqueness, stability and uniformity of the variety. DNA markers were used for this purpose and the number of DNA marker loci developed for tilapia were more than adequate. However, we collected DNA samples from every generation of breeders and stored them in a safe place even if there was no immediate plan to analyze them.

Visible and DNA markers were used for forensic analysis. DNA marker data (“fingerprint” profiles) were available for forensic use when it is necessary, i.e. if there is suspicion that the strain has been illegally obtained by a competitor. DNA marker data accumulated during successive generations of breed development can and have been used for this purpose. In this context, it was important to accumulate DNA samples and data each generation.

The long-term success of this program of selective breeding will depend on several key factors, including the establishment of a “synthetic population” with a broad genetic diversity, using a combined selection strategy, restricting inbreeding, measuring genetic gain, and disseminating the genetically enhanced fish to farmers. If properly implemented, it will provide significant benefits to tilapia farmers in Egypt as well as increase fish production in the country