The Runner ducks are the Leghorns of the duck family. They are prolific layers. Three hundred egg Indian Runner ducks were described and illustrated in the poultry press of 1912 to 14, and preceded the future for 300 egg hens which came later. In England, duck egg laying contests are carried on A Blue Runner drake from the UK

There are three varieties of Indian Runners, the Fawn and White, the White, and the Penciled. The breed has a distinctive type, the long, flat, straight head and long, slender neck forming, in shape, and umbrella handle and stem; the back should be long, straight and carried upright, and with the body should take on almost horizontal bearing. The type should be clean cut, there being little indication of a keel. The entire bearing should be upright and racey 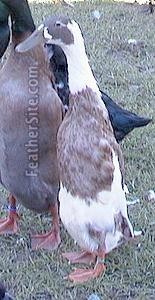 As would be expected in an active, profile breed of this kind, the specimens should not have too much size. The desired weights are: Adult drake, 4 1/2 lbs.; adult duck, 4 lbs.; young drake, 4 lbs.; young duck, 3 1/2 lbs. This breed originated in India, was introduces into England as early perhaps as 1830, but was little known in the United States prior to 1900. The Indian Runner produces a small to medium size carcass, but one of good quality. The ducks are practically non-sitters and are popular because of their prolific egg production which rivals the 200 egg stains of chickens 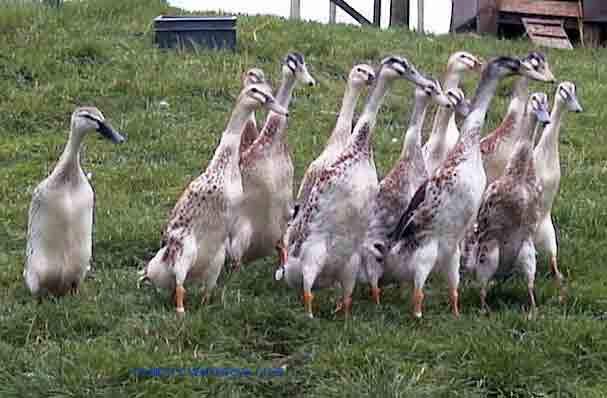 These were introduced from Malaya by various ships Captains and were found in the Cumberland and the Dumfries area.Though references point to Malaysia and the East Indies, the Indian Runner was originally brought to England from India by a seacaptain to Whitehaven and presented to some friends in West Cumberland some time around the 1840s. The same gentleman imported a few more some years later. Henry Digby imported a few more birds in 1898. In Races of Domestic Poultry published originally around 1906, Edward Brown theorises that 'it is probable that the present-day Runner ducks are either directly or indirectly descended. Some early books also refer to them as Penguin ducks but the engravings are of somewhat chunkier birds . They were such good layers that by 1896 there was a special Indian Runner class in the Dumfries Show and the standard was recognized in 1907 when the Fawn and White was noted. By 1913 the Fawn followed and in 1926 the Black and the Chocolate. Cumberland Blue were also mentioned in various literature. Many early Asian travel books mention upright stanced ducks often kept on latticed bamboo over the Carp ponds as their cylindrical posture lent itself to an early form of Factory farming / Food Cycle; this is also shown in Chinese artwork .

Indian Runner ducks, at present the Colour range is still expanding with the Black Chocolate and Blue often losing colour especially in females with age and the males succeptible to throwing odd white feathers after injuries /fights with other drakes. In solid colours such as blue/chocolate and black all young males should have NO white feathers they may appear from fighting but never from age 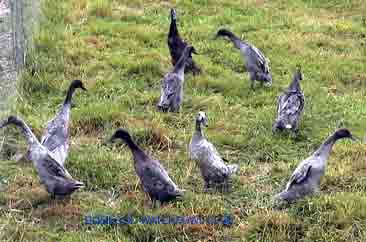 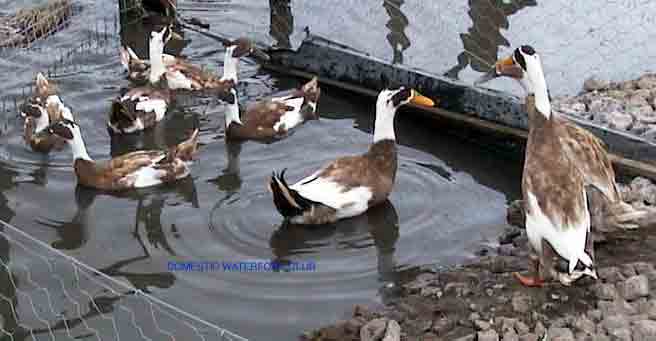 Breed Defects. .. . . White feathers in coloured plumage; EXCEPT white around the bill/ a sign of age in females; Dished bill; shoulders like Mike Tyson

Origins of the Breed

The Indian Runner Ducks are domesticated waterfowl that live in the archipelago of the 'East Indies'. There is no evidence that they came originally from India itself. Attempts by British breeders at the beginning of the twentieth century to find examples in the subcontinent had very limited success. Like many other breeds of waterfowl imported into Europe and America, the term 'Indian' may well be fanciful, denoting a loading port or the transport by 'India-men' sailing ships of the East India Company. Other misnamed geese and ducks include the 'African Goose', the 'Black East Indian Duck' and the 'Muscovy Duck

The Runner became popular in Europe and America as an egg-laying variety towards the end of the nineteenth century largely as a result of an undated pamphlet called The India Runner: its History and Description published by John Donald of Wigton between 1885 and 1890. Donald describes the pied variety and gives the popular story of the importation into Cumbria (Northwest England) by a sea captain some fifty years earlier

The breed is unusual not only for its high egg production but also for its upright stance and variety of color genes, some of which are seen in seventeenth century Dutch paintings. Other references to such domestic ducks use the names 'Penguin Ducks' and 'Baly Soldiers'. Harrison Weir's Our Poultry (1902) describes the Penguin Ducks belonging to Mr Edward Cross in the Surrey Zoological Gardens between 1837-38. These may well have been imported by the 13th Earl of Derby

The Cumbrian importations, according to Matthew Smith in 1923, included completely Fawn Runners and completely White Runners as well as the pied varieties. The most successful attempt to import fresh blood lines was by Joseph Walton between 1908 and 1909. A detailed account of these ventures can be found in Coutts (1927) and Ashton (2002). Walton shipped in birds from Lombok and Java, revolutionizing the breeding stock which, according to Donald, had become badly mixed with local birds. Further importations by Miss Chisholm and Miss Davidson in 1924 and 1926 continued to revive the breed

Pure breed enthusiasts, exhibitors and show judges wanted to establish standard descriptions. Standards were drawn up in America (1898) and England (1901) for the pied color varieties. These were largely the same until 1915 when the two countries diverged. The American Poultry Association chose a variety with blue in the genotype whilst the English Poultry Club Standard kept to the pure form described by Donald in his original pamphlet. Other colors followed making use of black genes brought in by some of Walton's birds. These were to produce Black, Chocolate and Cumberland Blue. Later were developed the Mallard, Trout, Blue Trout, and Apricot Trout versions. Slightly different names and descriptions can be found in American and German Standards. A full account of the influence of the Indian Runner Duck Club (founded in 1906), particularly the input by John Donald, Joseph Walton, Dr J.A. Coutts and Matthew Smith, can be found in Ashton (2002)

The most profound impact of the Indian Runners was on the development of the modern 'light duck' breeds. Before 1900, most ducks were bred for the table. Aylesbury and Rouen Ducks were famous throughout the nineteenth century, and these were supplemented or replaced, after 1873-4, by importation from China of the Pekin Duck. As soon as the Indian Runners became fashionable, a demand for egg-layers and general purpose breeds developed. Using Runners crossed to Rouens, Ayesburys and Cayugas (the large black American breed), William Cook produced his famous Orpington ducks. Mrs Campbell crossed her Fawn-and-white Runner Duck to a Rouen drake to create the Campbell ducks. Later, she introduced wild mallard blood and managed to create the most prolific egg-layer, the Khaki Campbell (announced in 1901). Other breeds followed, some of which emerged as direct mutations of the Khaki Campbell, along with crosses back to Indian Runners, the most famous being the Abacot Ranger (known in Germany as the Streicher) and the Welsh Harlequin

Indian Runner Ducks and Pekins brought in unusual plumage color mutations. These included the dusky and restricted mallard genes, light phase, harlequin phase, blue and brown dilutions, as well as the famous pied varieties named by the geneticist F.M. Lancaster as the 'Runner pattern'. Much of the proliferation of new color varieties in breeds of domestic duck begins with the importation of these oriental ducks. Original research by R.G. Jaap (1930s) and F.M. Lancaster has allowed breeders to understand the effect of genotypes in managing and creating color varieties. Simplified information can be found in writings by Dave Holderread, and Mike and Chris Ashton 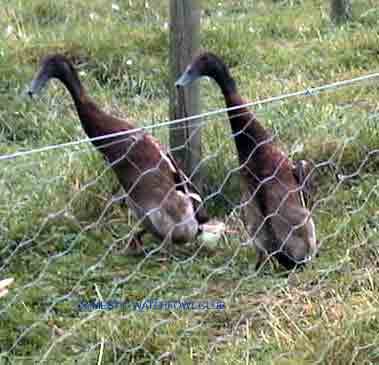