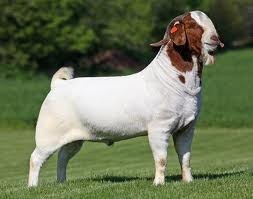 The Boer goat originated in the Easter Cape Province of South Africa in the early1900s when farmers began selective breeding for a meat-type goat using native goat breeds . During this early development of the Boer goat some crossbreeding occurred with Indian goats and European dairy goats. The name of the breed comes from the Dutch word boer meaning “farm”; it was probably used to distinguish the breed from the Angora goats that were also raised in South Africa. Breeders selected for good conformation, rapid growth rate, high fertility, and short hair with red markings around the head and shoulders. Breed standards were established in 1959 with the formation of the Boer Goat Breeder’s Association of South Africa.

Current breed standards are a white color with a red head and a white blaze.

A few red patches are allowed and a pigmented skin is preferred. The breed is horned and has a Roman nose. Polled individuals will occur occasionally, probably as a result of the European dairy breeds used in the early development of the breed.

Males reach puberty at about 6 months of age and females at about 10 to 12 months of age. The breed is prolific, with a kidding rate of 200 percent being common. Because the Boer has an extended breeding season, it is possible to have 3 kid dings every 2 years.