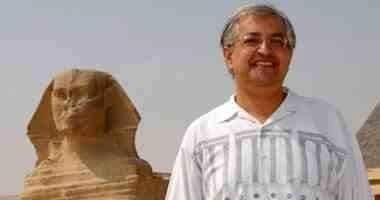 (Related: "King Tut Mysteries Solved: Was Disabled, Malarial, and Inbred.")
Ahmose Meryet Amon—"Child of the Moon, Beloved of Amun"—had blockages in five major arteries, including those that supply blood to the brain and heart, said study co-leader Gregory Thomas, a professor of cardiology at the University of California, Irvine.
"If the princess was in a time machine and I was to see her now, I would tell her to lay off the fat, take plenty of exercise, then schedule her for heart surgery," Thomas said.
"She would require a double bypass."
Egypt Princess Lived in Times of Bread and Honey
Although the mummies' actual hearts had been removed before entombment, the CT scans uncovered calcium deposits elsewhere in the bodies that are indicative of artery damage. But the study team could not confirm that any of the mummies died of heart disease, because most of the mummies' organs were either disintegrated or missing.
However, a medical text dating back to the time the princess lived—between 1550 and 1580 B.C.—describes the pain in the arm and chest that precedes a potentially fatal heart attack. (Read "Mending Broken Hearts" in National Geographic magazine.)
In general, blocked arteries and heart attacks are health risks we associate with today's lifestyle and diet, not those of the ancient Egyptians, noted study co-author Michael Miyamoto of the University of California, San Diego's School of Medicine.
"They lacked a lot of the risk factors that we consider to be important in the development of atherosclerosis in modern populations—namely smoking, high rates of diabetes and obesity, and foods rich in trans fats," Miyamoto said.
But as a daughter of the Pharaoh Seqenenre Tao II, the princess—like the other examined mummies—was a member of the elite. That means she was possibly more prone to heart disease than the rest of the population.
"Since they were the elite, they presumably led more pampered lifestyles, were more sedentary, and also—maybe importantly—had access to foods which were dense in calories, particularly meats," Miyamoto said.
Adel Allam, study co-author and professor of cardiology at Egypt's Al Azhar University, added that the princess lived during a prosperous period of Egyptian history.
"Even the very poor people would eat a lot of pork, and the bread became mixed with honey," he said. "If ordinary people at this time did get a lot of carbohydrates and fat in their diets, then of course the elite would have got even more unhealthy food," he said.
Royal's Damaged Arteries a Family Affair?
Perhaps backing up diet as a contributing factor, researchers had previously found some evidence among ancient Egyptians for diabetes, a condition often associated with obesity, Allam added. Also, Egyptian papyrus documents by ancient physicians refer to diabetes symptoms.
However, although body fat is not preserved on ancient mummies, the signs are that Ahmose Meryet Amon was probably petite, Allam said. In fact, the team suspects some factor other than diet and lifestyle may have contributed to her vascular disease.
(Related: "Chemical BPA Linked to Heart Disease, Study Confirms.")
For instance, "in her family there were a couple of other queens and princesses that had atherosclerosis, so a genetic element cannot be excluded," Allam said.
The new study suggests that genetics may be even more important than thought in causing atherosclerosis, and the mummies might hold clues to which genetic factors are involved.
Another possibility is that atherosclerosis can be brought on by chronic inflammation caused by a person's immune system responding to infection, which in turn can lead to inflammation of the blood vessel walls.
"The princess was known to have arthritis and inflammation of the joints," Allam noted. "Also, she had severe dental disease, which is another inflammation."
The US-Egyptian research team is undertaking further studies on a total of 72 mummies to investigate the individuals' genetic links, evidence of other health issues including arthritis and cancer, and whether their bones can reveal how active they were.
The team's most recent findings are published in the April issue of the Journal of the American College of Cardiology: Cardiovascular Imaging.
Atherosclerosis, or hardening of the arteries, is a condition
in which plaque builds up inside the arteries. Plaque is made of cholesterol, fatty substances, cellular waste products, calcium and fibrin (a clotting material in the blood).
Atherosclerosis is a type of arteriosclerosis. Arteriosclerosis is a general term for the thickening and hardening of arteries.
What damage does atherosclerosis cause?
Plaque may partially or totally block the blood's flow through an artery in the heart, brain, pelvis, legs, arms or kidneys. Some of the diseases that may develop as a result of atherosclerosis include coronary heart disease, angina (chest pain), carotid artery disease, peripheral artery disease (PAD) and chronic kidney disease.>>>>