Unfertilized egg: The embryonic disc of a sterile egg bears an accumulation of white material at its center

Fertilized egg: The fertilized embryonic disc looks like a ring: it has a central area, lighter in color, which is to house the embryo

Day 1: The germinal disc is at the blastodermal stage. The segmentation cavity, under the area pellucida, takes on the shape of a dark ring

Day 2: Appearance of the first groove at the center of the blastoderm. Among extraembryonic annexes, appearance of the vitelline membrane which is going to play a major role in embryo nutrition

Day 3: The embryo is lying on its left side. Onset of blood circulation. The vitelline membrane spreads over the yolk surface. The head and trunk can be discerned, as well as the brain. Appearance of the cardiac structures which begin to beat Day 4: Development of the amniotic cavity, which will surround the embryo: filled with amniotic fluid, it protects the embryo and allows it to move. Appearance of the allantoic vesicle: it plays a major role in calcium resorption, respiration and waste storage Day 5: Sensible increase in the embryo’s size; the embryo takes a C shape: the head moves closer to the tail. Extension of limbs. Differentiation of the fingers of the inferior limbs Day 7: Thinning of the neck which now clearly separates the head from the body. Formation of the beak. The brain progressively enters the cephalic region: it progressively grows smaller proportionally to the embryo’s size Day 8: The vitelline membrane covers almost the whole yolk. Eye pigmentation is readily visible. The beak’s upper and lower parts are differentiated, as well as the wings and legs. The neck stretches and the brain is completely settled in its cavity. Opening of the external auditory canal Day 9: Appearance of claws. Budding of the first feather follicles. Growth of the allantois and increased vascularization of the vitellus Day 10: The nostrils are present as narrow apertures. Growth of eyelids. Extension of the distal portion of the limbs. The vitelline membrane completely surrounds the yolk. Feather follicles now cover the inferior part of the limbs. Appearance of the egg-tooth

Day 11: The palpebral aperture has an elliptic shape that tends to become thinner. The allantois reaches its maximum size while the vitellus begins to shrink. The embryo now has the aspect of a chick Day 12: Feather follicles surround the external auditory meatus and cover the upper eyelid. The lower eyelid covers two thirds, or even three quarters, of the cornea Day 13: The allantois shrinks to become the chorioallantoic membrane. Appearance of claws and leg scales

Day 14: Down covers almost the whole body and grows rapidly

Day 15 & 16: Few morphological changes: chick and down continue to grow. Vitellus shrinking accelerates. Progressive disappearance of the egg white. The head moves toward pipping position, under the right wing Day 17: The embryo’s renal system produces urates. The beak, which is under the right wing, points to the air cell. The egg white is fully resorbed Day 18: Onset of vitellus internalization. Reduction in the amount of amniotic fluid. This is the time for transfer from incubator to hatcher, and also perhaps in ovo vaccination Day 19: Acceleration of vitellus resorption. The beak is against the inner shell membrane, ready to pierce it Day 20: Vitellus fully resorbed; closing of the umbilicus. The chick pierces the inner shell membrane and breathes in the air cell. Gas exchanges occur through the shell, which is porous. The chick is ready to hatch. Piercing of the shell begins Day 21: The chick uses its wing as a guide and its legs to turn around and pierce the shell in a circular way by means of its egg-tooth 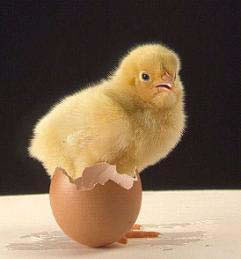