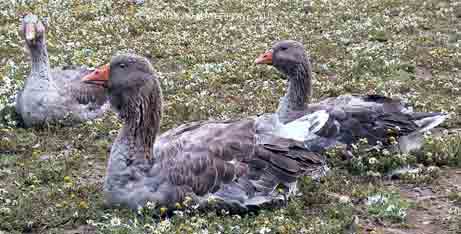 
Country of Origin: France . The Toulouse Goose was bred in southern France (near the city of Toulouse) originally for pate de Fois Gras now considered a superior meat bird in Europe. The breeding work to finalize the points and breed true was done in England with a great number being exported to America and Canada prior to the 1950's . At the moment the Club has been importing a number back from the USA as the gene pool in Britain has become too narrow making a number of males virtually infertile.


Breed Background: A heavy breed which does well in confinement since their size restricts foraging and although their goslings tend to grow slower than other geese 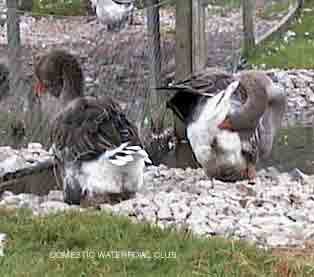 The progeny of a Toulouse goose crossed with an Emden gander grow rapidly.

Broodiness: Incubation:. . . . 28 - 34 days/ good mother but clumsy due to size need a large hay covereed tray for the eggs to prevent cruching as they pip. Otherwise hatch very well under Muscovies

Breed Hints....Kept as trio or pair .. will go broody and hatch

Breed Tip**As a breed succeptible to flystrike (maggots) on open cuts or scratches which are disguised by the open feathering.

Tip due to their size in comparison to their leg length they prefer real ponds or shallow edged trays/ childrens sandpits (ELC or IKEA) as many others can produce a snug fit. Wickes builders merchants do a 'cement mixing tray' in black composite. . . cheap!


Appearance: Grey feathers laced with white, brown eyes with a long deep body with a prominent breast bone. Better show birds have a pronounced front as in the picture and double muscled folds when seen from the front. Better breeding birds often have less front or their 'equipment' does not reach to mate successfully


Meat Production: The supreme meat cross which tends to pass on the placid (dumb) temperamernt to the off spring. As a pure breed it often resembles a large tub of lard with feet .....so unless a very poor specimen not worth the plucking...... better for the breeding pen for X breds 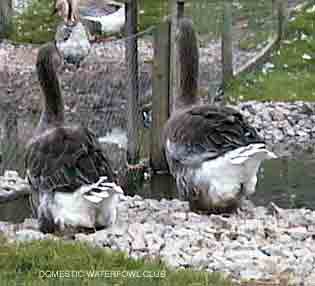 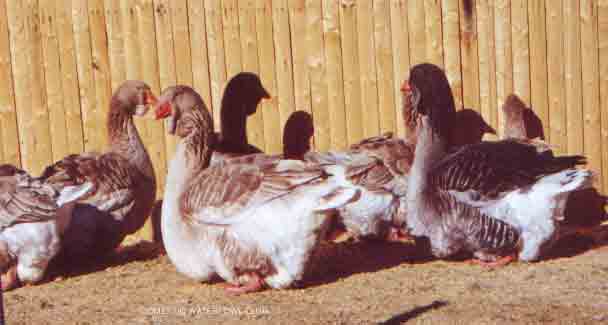 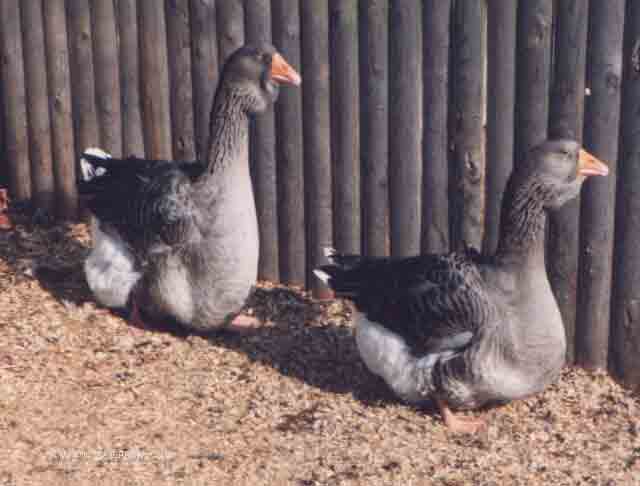 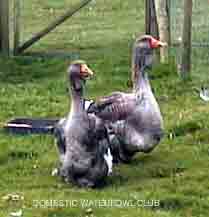 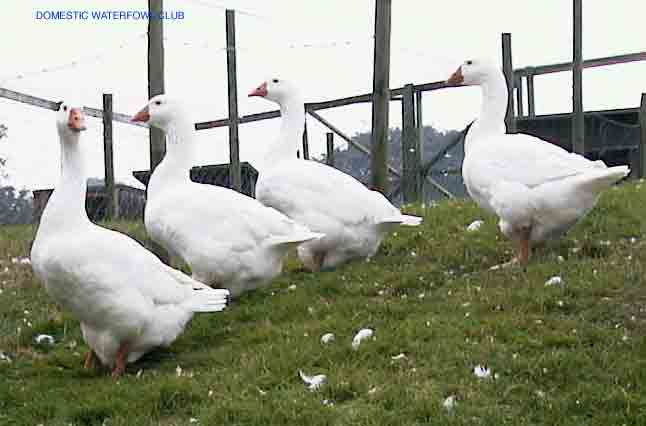 Of great age and history

Appearance: This is the tallest goose with a massive and long body, long swan neck, with the double lobes not touching the ground. The colour of the plumage is completely white (some grey feathers are admitted in young ones / first year often under the wing); Bright orange bill with flesh coloured bean ; and legs; clear blue eyes, ( if crossed for the Toulouse/Embden meat birds eye colour will alter so check).The normally reach over a metre in height

Meat Production: The true Embden Goose suffers like the Aylesbury in that most of the public think all white geese are Embden's whereas few of them are actually pure bred stock. The height of this breed will normally be the giveaway as they are considerably taller than their cross bred cousins 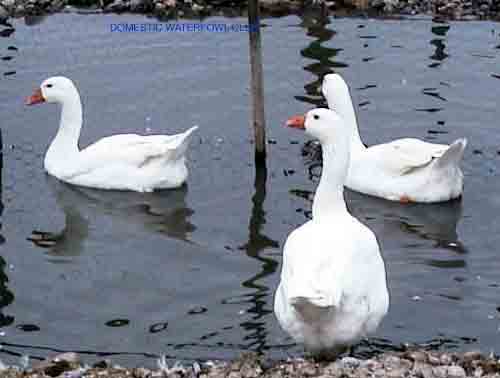 The Embden Goose breed is also known as the Bremen and although a German name most historical sources place this as a northern Dutch breed that also migrated throughout Europe to Italy where it was imported from to cross with our native white breeds. Also known as L'oie d'Emden in France/Belgium


Country Of Origin;........ Although a German name most historical sources place this as a northern Dutch breed that also migrated throughout Europe to Italy from where it was imported from to cross with our native white breeds

Breed Hints....****.The tallest breed if the bird is short and dumpy it is NOT an Embden

Breed Tip  Kept as pair or flock.... can be over protective of their 'wives & young' in spring so not a beginners breed. Can also be short fused with small dogs ie not advisable for dog keepers unless you have a problem. . .  .

Info**Used historically as a meat cross either with the utility Toulouse ( darker drier meat) or another large framed breed..... can run to fat so used to be killed off at Michlemas 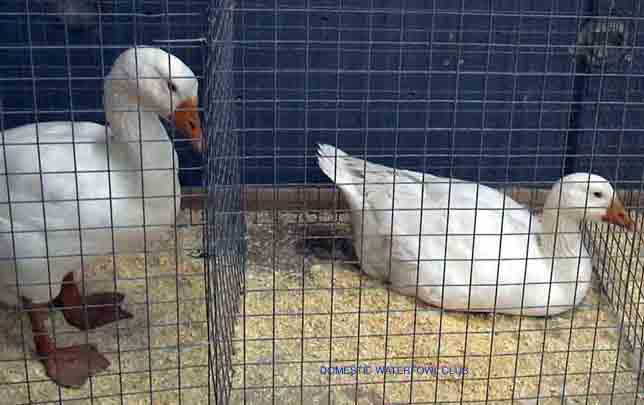 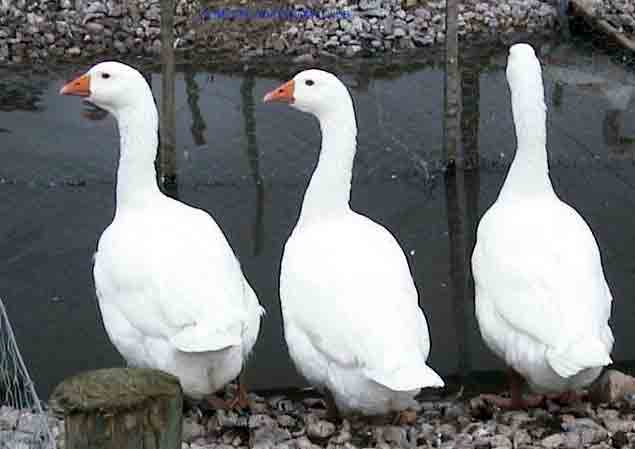 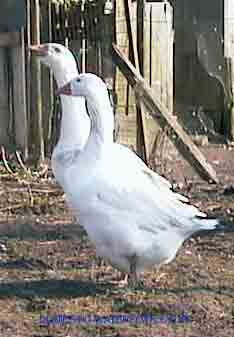 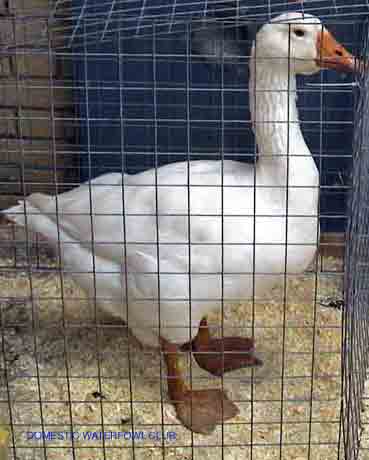 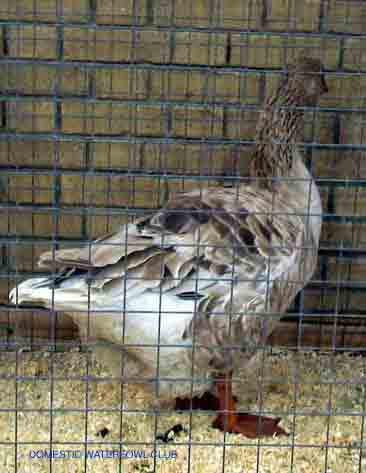 .Appearance: A heavy smooth breasted and double lobed breed with a stance similar to the Embden Goose

~Upright and alert with deep hazel eye ; orange bill and legs preferably with a lighter orange rather than pink bean

In the US noted as an American descendant of the wild Greylag goose, which is found in Europe and Northern Asia

As a dual-purpose goose, it produces both eggs and meat. The meat is a rich, dark meat. The buffgoose is an apricot-fawn color with a whitish abdomen, brown eyes and orange feet and bill. The breed is the largest of the medium weight class of geese( in the USA) with mature ganders (male) weighing about 18 pounds and mature geese weighing about 16 pounds


The American Buff is calm and docile, a good choice for a home flock. They are good, attentive parents. In 2003, there were fewer than 500 breeding birds and five or fewer breeding flocks. in the USA so there categorised as rare breed 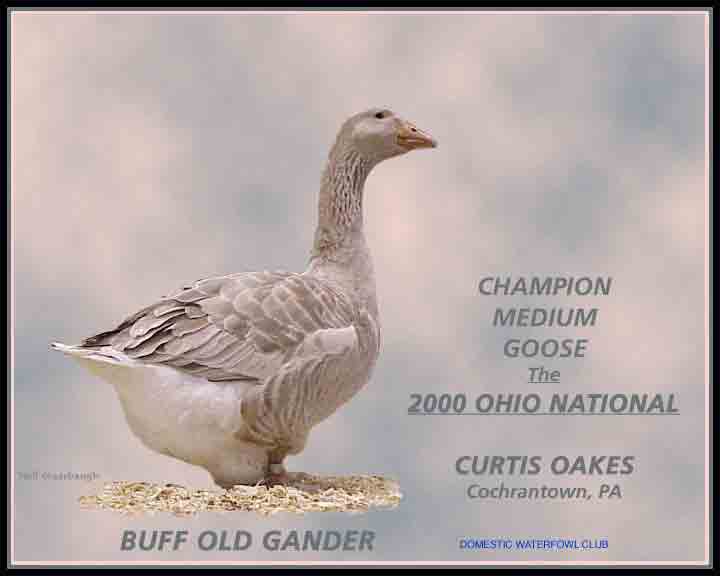 Names. . . .As in the Brecon not all large Buff geese are American Buffs ... if in doubt ask to see the parent birds.

Breed Defects. .   . . . White feathers in coloured plumage; EXCEPT white around the bill/ a sign of age as in a Brecon Goose; Uneven Lobes 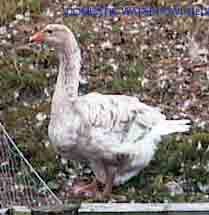 The African should be of about the same size as the Embden, except in the case of the young goose, which may be a couple pounds lighter in weight. The African is the outcome of a cross between the Toulouse, and the Brown Chinese, taking some of the size and dewlap of the Toulouse, and somewhat of the upright carriage and 'knob' which is the ornamental head appendage of the Chinese. The African is said by some breeders to be a distinct breed imported from Africa, but the evidence of the cross is apparent 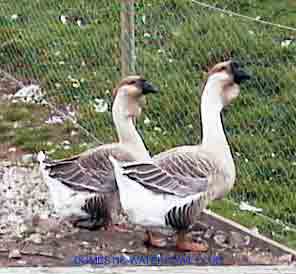 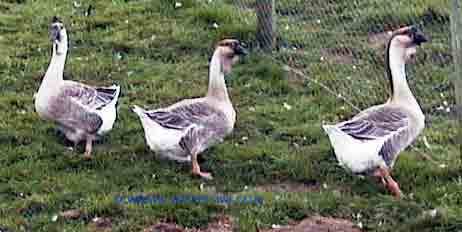 Tips for improving your flock......based on Dave Holderread's and Oscar Grow's books (taken from the Australian rare Breed Site)

Always look for massive features (even in their first year they should have large, coarse heads and thick necks) and carriage 30 to 40 degrees.

Head should be large and broad between the eyes

Knob should be as wide as the head

Older females especially when laying will often have low-hung paunches and show some indication of a keel. But all males and young females should be keel-less and only a moderately full abdomen. Selecting for this should maintain the breed's fame as a lean meat bird.

Africans with tails held in line with the back or lower often indicate physical weakness and infertility.

Avoid young geese of too refined type, otherwise the flock will eventually revert to the Chinese breed type (small and slender rather than massive and meaty).

Avoid young geese that have already developed a pronounced dewlap. Africans do not grow the dewlap as fast as Toulouse and it will not fully develop until aged about three years. 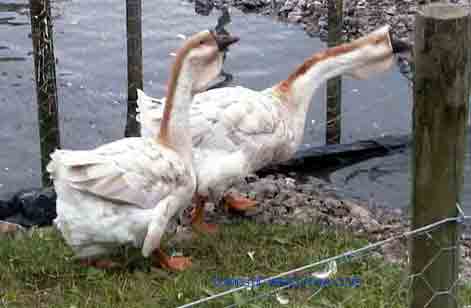 Some individuals don't get the dewlap until over 18 months old, whilst  Names Also Known as L'oie de Guinee or L'oie Africaine in France ie Guinea Goose

Carriage;Reasonably upright 35 to 40 degrees above the horizontal rather than the Chinese geese which stand much more upright. Height 90 cm av

Info  A very gentle breed that is much quieter than its skinny cousin. Available in white; brown (grey) and buff.

Breed Hints.... Kept as trio or pair .. will go broody and hatch

Breed Tipothers might develop one at 6 months. The dewlap runs down from the bill into the neck. The knob should be oriented slightly forward. Paunch should not touch the ground.'

Flying . . .normally too heavy but has been known . . very rarely 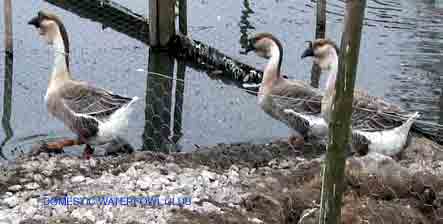 I believe this would also work for Buff Toulouse so I felt this may be of interest to any of you experimenting out there. 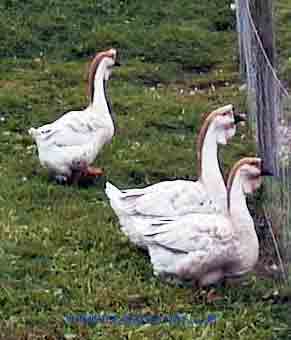 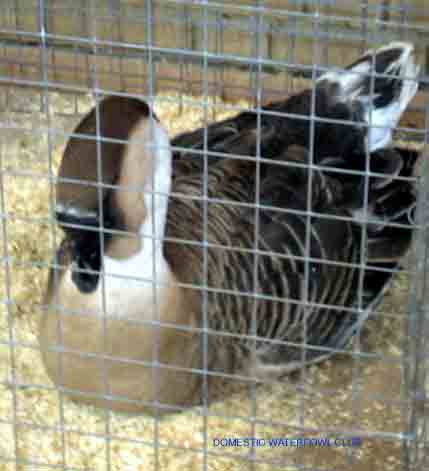