The head of a Mallard drake 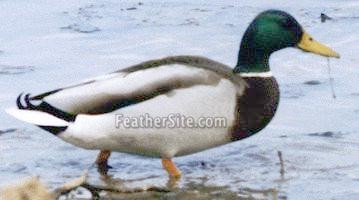 The Mallard or wild duck (Anas platyrhynchos), is a dabbling duck which breeds throughout the temperate and subtropical countries. The male birds have a bright green or blue head, while the female's is light brown. The Mallard lives in wetlands, eats water plants, and is gregarious. It is also migratory. The Mallard is the ancestor of all domestic ducks, and can interbreed with other species of genus Anas. However, a potentially terminal side effect of this vast interbreeding capability is gradual genetic dilution, which is causing rarer species of ducks to become at risk for extinction

Although domestic ducks (except for Muscovies) are all descended from Mallards (Anas platyrhynchos), most of them have been bred so that their bodies are too heavy and wings too small to support flying. Of the mallard-derived breeds, only Calls and some of the other bantam ducks can fly. Muscovies also can fly well, especially the females. Male Muscovies can lumber up in the air and flap about a bit, but they sure don't remind me of birds

Note that most Mallard-colored drakes, and some of other colors, undergo an Eclipse molt in late summer, after which they are colored like females. They will molt again into male colors later in the year

Mallards usually form pairs (in October and November) only until the female lays eggs at the start of nesting season which is around the beginning of spring (early March to late May), at which time she is left by the male who will join up with other males to await the molting period which begins in June. During the brief time before this, however, the males are still sexually potent and some of them will either remain on standby to sire replacement clutches (for female Mallards that have lost or abandoned their previous clutch) or forcibly mate with females of a different species that appear to be isolated or unattached. The nesting period can be very stressful for the female; since she lays more than half her body weight in eggs and requires a lot of rest and a feeding/loafing area that is safe from predators. When seeking out a suitable nesting site, the female's preferences are on areas that are well concealed, are inaccessible to ground predators, and/or have few to no predators living nearby. This unfortunately includes urban areas that have roof gardens, enclosed courtyards, and flower boxes on window ledges/balconies more than one story up which prevents the ducklings from leaving safely or at all without human intervention. The clutch is 8–13 eggs, which are incubated for 27–28 days to hatching with 50–60 days to fledgling. The ducklings are percocial and fully capable of swimming as soon as they hatch. When ducklings mature into flight-capable juveniles, they will learn about and remember their traditional migratory routes (unless they are born and raised in captivity). After this, they will either continue staying with the mother (until the breeding season arrives) or finally set off on their own to seek out new sources of food and water, both natural and artificial. When they pair off with mating partners, often one or several drakes will end up "left out". This group will sometimes target an isolated female duck, even when she's of a different species, and proceed to chase and peck at her until she weakens, at which point each male will take turns copulating with the female. Lebret (1961) calls this behaviour ‘Attempted Rape Flight’ and Cramp & Simmons (1977) speak of ‘rape-intent flights’. Male Mallards will also occasionally chase other male ducks of a different species, and even each other, in the same way. In one documented case of ‘homosexual necrophilia’, a male Mallard copulated with another male he was chasing after the chased male died upon flying into a glass window.

The green head, yellow bill, and black rump of the Mallard Duck is a familiar sight for many people living in the Northern hemisphere. Nearly 10 million Mallards live in North America with millions more in Eurasia. It is thought to be the most abundant duck in the world today

The water feels so good!

The Mallard is a medium size duck measuring 18 to 27 inches in length. During the breeding season the male has a green head, white neck ring, chestnut colored breast, and a gray body. The inner feathers on the wing are a metallic bluish-purple bordered with white. Its bill is yellow with a black tip. The female is a mottled brown with a white tail. Like the male, the feathers on its inner wing are a bluish-purple. The female has a mottled orange and brown bill rather than the distinctive yellow.

During the non-breeding season, the male's plumage is similar to the females, but it maintains its distinctive yellow bill and chestnut colored breast

Mallards are known as puddle or dabbling ducks, which means they search for food on or near the water's surface. They dabble by tipping up with their head under water, and their tail wagging in the wind

Like most puddle ducks, the Mallard can spring into the air without having to run across the water's surface to build up speed

The Mallard Duck's summer range covers a wide territory. It stretches from Alaska and Quebec, south to northern Mexico and Texas. The Mallard will spend its winters in the warmer climes of the United States, Central America, and the West Indies.

They inhabit most wetlands. They will settle along lakes, ponds, river bends, marshes, estuaries, and even ditches. It is not uncommon to see a family of Mallards, swimming in the lakes and ponds in city parks and playgrounds. If the water is fairly calm, the Mallards will find it.

From Courtship to Parenthood

The Mallard Duck's courtship starts in the fall. The Males grunt and whistle, swim, pump their heads, and preen in front of the females. The females spur the males on with loud calls and suggestive body movements. The rituals usually occur on the water, but chase flights are not uncommon. By midwinter the pairs have formed. The mated pair migrate together returning to the female's place of origin.

The nest is usually built on the ground within a hundred yards of water. The depression is lined with soft reeds and grasses. The nest is usually concealed in tall grass or reeds. Once the female lays her eggs, the male abandons her.

The female Mallard's clutch usually has 8 to 13 eggs. They are incubated for 27 to 28 days. The ducklings are precocial, which means they can swim and feed themselves right after hatching. They stay close to their mother for protection until they fledge at 50 to 60 days.

After the Mallard drakes abandon their mates to the job of raising the young, they fly to a secluded area and undergo their annual molt. The molting of their wing feathers leaves them temporarily flightless. They are no longer displaying their courtship plumage, but a drab "eclipse" plumage is similar to that of a female. It provides better camouflage against predators while their wing feathers grow back. The entire process takes 2 to 3 weeks. The hens go through a similar molt once their ducklings have fledged.

After breeding season, the Mallard Duck is quite gregarious. They will form large flocks which are known as a sord.

Mallard Ducks are omnivores. They are often seen with their head under water and their tails sticking up in the air as they dabble for their next meal. That meal may be comprised of plant food, invertebrates, fish, or amphibians. They will also graze on land, feeding on grains and small plants.

Mallards fly in small groups or in V shaped flocks. The flock is usually comprised of 10 to 20 members, but the flock can swell to over a hundred. They are swift fliers and excellent swimmers.

The Mallard Ducks are a noisy species. The hen's call is the quack-quack often associated with ducks. The drake's call is a reedy quack and during mating season will pierce the air with sharp single and double-noted whistles.

Listen to the call of the Mallard Duck

The lifespan of the Mallard Duck is 7 to 9 years, but over half die before they reach 2 years of age. They die from predation, accidents, hunting and diseases such as botulism, cholera and viruses A Mallard hen on a new brood