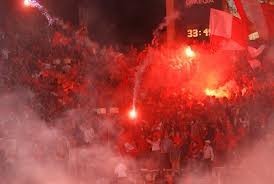 The 2006 African Cup by Seif Kamel

The 2006 African Cup (football, Soccer) is coming to Egypt! Should make for some great fun, and you can find out about it here.

Cairo, like other huge cities, has a number of different festivals. They range from various art and dance festivals, to experimental theater and foreign movies. There are book festivals, fishing festivals and all kinds of local festivals. But one festival, the 3rd Cairo Oriental Dance Festival, certainly has the potential to be one of the most fun festivals to attend, both far participants and the audience alike. Today we depart from our recent series of antiquity related articles so that we can explore this upcoming event. Scheduled to begin on June 20th, 2002, and end June 26th, this event is essentially all about belly dancing. Presented by Raqia Hassan and Misr Travel, it will take place at the Ramses Hilton and many of the world's top belly dancers will be in attendance, along with scholars on the topic.

Let the Festivities Begin: Day 1 of the 7th Cairo International Song Festival by

One of the annual events organized by the CICC is the Cairo International Song Festival from August 20th to the 28th of the same month. It is a huge song festival where competitors from all over the world gather to perform and be judged by professionals in the field of music

On September 5th, the Minister of Tourism, Farouk Hosni, declared the 17th Alexandria International Film Festival open. The opening ceremony was in the conference centre of Alexandria. The ceremony was attended by many Egyptian and foreign actors as well as the governor of Alexandria General Abd El Salam El Mahgoub.

Arabian Horse, The: Tales from "Sport in Egypt"

The book, Sport in Egypt, was published in 1938, a period when Egypt was considerably different then the country we find today. This book, obviously written by Mr. Wentworth Day, and published in Great Briton, provides chapters on a number of sports, opening with one written by another member of the royal family, H.R.H. Prince Mohamed Aly on the Arabian Horse. According to the Columbia Encyclopedia, Sixth Edition, Horse racing may have had its roots in Egypt in about 1500 BC, and some events continue in Egypt today. The breeding of Arabian horses also remains a popular endeavor, so even today, this old account of the Arabic horse may hold some of our reader's interest.

What's it like in the Cairo Stadium during the African Cup Egypt 2006. Seif Kamel, a big fan, thinks its a whole lot of fun!.

Egypt in the 2004 Summer Olympics

The original Olympics were held every four years for almost eight centuries. In 393 AD, the Roman Emperor Theodosius, during a period of increasing Christian piety, banned the original Olympic games as pagan. Not until 1896 were the games revived, first in Greece, in a stadium paid for by an Egyptian businessman of Greek origin. Yet, Egypt did not make its modern Olympic debut until 1924, at the Olympics in Antwerp, Belgium. We rarely cover modern sports in Egypt, but this year the Olympics return to their ancient venue, and with them come one of Egypt's best medal chances in years.

Most of the expertise agrees that the Egyptian Rock-Age started around 1967 AD - and ended nearly 25 years ago. That was until a late evening of Friday, the 22nd of June 2001 - in a club called Dharma, Merryland in Cairo.

More and more kids are coming to Egypt with their parents. Certainly they are always interested in the Pyramids, but their focus on antiquities may not be as high as many adult visitors. They have a tendency to enjoy boat rides, and particularly ridding camels, swimming in the nice pools found in almost all hotels, and now there is even more for them to do in Egypt. While no Disney Lands yet, Egypt has a number of theme parks

We have been getting a lot of inquires about fishing on the Nile, and one can always find Egyptians doing so as they have for ages.

You might be surprised when you hear that you can play a round of golf in Egypt. Golfing in Egypt was not so popular a few years ago. There was a limited amount of golf courses, such as the Mena House Oberoi Hotel golf course, which is a small nine-hole course. The Gezira Club golf course was one of the first golf courses in Egypt, but it is strictly for members only. With the development of new suburban residential areas, golfing has become more and more popular. Now there are a wide variety of golf courses, not only in Cairo, but all over Egypt.

Golf is growing in popularity in Egypt, with more and better golf courses in a land where it hardly ever rains and the weather is usually perfect.

Cafs in Egypt are nice gathering spots for friends. In Egyptian Kahwa means coffee and can also mean a coffee shop. Often, they are like local pubs in the West, where people from a specific neighborhood gather. Like Paris and Greece, Kahwas are often sidewalks Cafs. The main item served in a Kahwa is the sheesha or hookah pipe.

Nile Dinner Cruises are one of the coolest and most romantic way to have dinner, some entertainment and cruise the Cairo Nile.

Some Cairo Cafes and Restaurants by Lara Iskander

Cairo is a city of high culture, including a number of restaurant that can challenge the best to be found anywhere in the world.

Tales from Sport in Egypt Morning Flight at Tel-El-Kebir

Four o ' clock in the morning in a back bedroom at Shepheard's and the sun not yet up. I woke to the grinning vision of a black Sudanese face beaming over me like a nocturnal bulldog with a full-size piano keyboard set of teeth. He had tea on a tray, a boiled egg of that peculiarly small variety which the athletic chickens of Egypt produce, and oranges. 'Time to get up, sare,' he announced with a gleefully malicious undertone. 'Four o'clock, sare-and Mr Goldstein sends you copy today's Egyptian Mail by quick boy .' This was almost too much. It is no good preparation for a day's duck shooting to retire to bed at half-past two in the morning having drunk far too much champagne and danced with far too many Syrian, Greek, French, Hungarian and Smyrnese forms of beauty.

So Why the Red Sea? A Postcard from Ned Middleton

Last week I returned from yet another Scuba Diving assignment to the Egyptian Red Sea. As always, I sent my customary 25 postcards - although I do cheat a little here. I actually take 25 printed sticky address labels with me and I rarely write more than "Regards - Ned" as the narrative. Esther (my wife) tends to get a few more words with "I saw this and thought of you!" written on the back of a carefully selected image of a Napoleon Wrasse or Nurse Shark! Esther visits South Africa every year - and promptly gets her own back with a similar message on the back of a picture of a Hippopotamus! But I digress.

The Ultimate Guide to the African Cup

The African Cup (Football, or soccer for Americans) is a huge event in Egypt and happening right now.

You might run across a Whirling Dervish performance anywhere in the world, but your chances of doing so vastly improve in Egypt. Not only is there the dervish theater located near the Khan el-Khalili, but many belly dancing shows in nightclubs and dinner boats will also include Whirling Dervish. It is an entertaining performance that most will not want to miss. But most people who attend such performances have little idea of the nature of this dance, which is called the sema. It is a rare occurrence of religious ceremony transcending into performing art.

Why I keep Going Back, and This is No 'Fish Story'!!

Sport Fishing is not usually the first thing that comes to mind when one thinks of travel to Egypt. However, Duncan McLean, an avid angler from the UK, gives us his account of his various, high