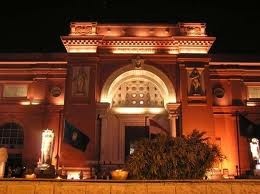 The Egyptian government established the ‘Service des Antiques de l’Egypte’ in 1835 mainly to halt the plundering of archeological sites and to arrange the exhibition of the collected artifacts owned by the government. The Azbakian garden in Cairo was first used as a storage place for these artifacts.The collection was later transferred to another building in the citadel of Saladin.

In 1858, a museum was prepared at Boulaq, its contents collected by the French archeologist August Mariette. In 1880, the contents of the Boulaq museum was transferred to an annex of the Giza palace of Ismail pasha, the ruler of Egypt. The present museum was built in 1900, in the neo-classical style by the French architect Marcel Dourgnon.

This museum exhibits over 120000 objects, some of the important groups of these objects are : Artifacts from the tombs of kings and members of the royal families of the Middle Kingdom found at Dahshur in 1894.The contents of the royal tombs of Tuthmosis III, Tuthmosis IV, Amenhotep III and Horemheb and the tomb of Yuya and Thuya.Artifacts from the tomb of Tutankhamun, consisting of more than 3500 Pieces, of which 1700 objects are displayed in the museum the rest are in storerooms